What is Step Logic in a Powerflex 525?

If you have ever used a PLC of any kind then you know what it is like to program logical controls for machinery. With that being said, that style of logic is written with the software of that PLC manufacturer which is often where the cost comes into play along with having someone that knows how to program using it. This can add up when you have a cheap install & need a good alternative that doesn’t break the bank.

This is where Rockwell Automation came in with an application to help save money & time….we have a video below showing how this process can help, showing the setup & function of a Powerflex 525 using this step logic process.

Step logic in the Powerflex 5 series drives gives the ability for the user to program the drive to work without the use of a PLC. Using the quick setup wizard inside of the Connected Components Workbench software which is a free download from Rockwell Automation. Yes, that is right….a free download.

In fact, if you want a quick ability to get Connected Components Workbench 12 then you can use the download link below.

Please note that it takes about an hour to install CCW then you will need to reboot your computer, we actually show everyone you would need to know about this is our Powerflex 525 course if you need training on this.

Step logic in the Powerflex 5 series drives has two different options that can be used.

Both of these can be easily programmed in the Powerflex 525 drive using the CCW setup wizard.

What is Velocity Step Logic?

Velocity step logic gives the ability to controls different speed controls, times, inputs, & outputs, based on the needs of the application that you need to use it on. Giving 8 steps that can be used & each step is treated independently so that you get full control over each step. Whether a time-based step change or waiting on an input to be active before changing steps. These work great for applications that are continuous or that use repetitive use that is the same without the use of any PLC controls.

Both the Velocity & Position Wizards have Common Settings that will point out issues if there are any along with give you a quick way to set all of the elements needed for your setup. 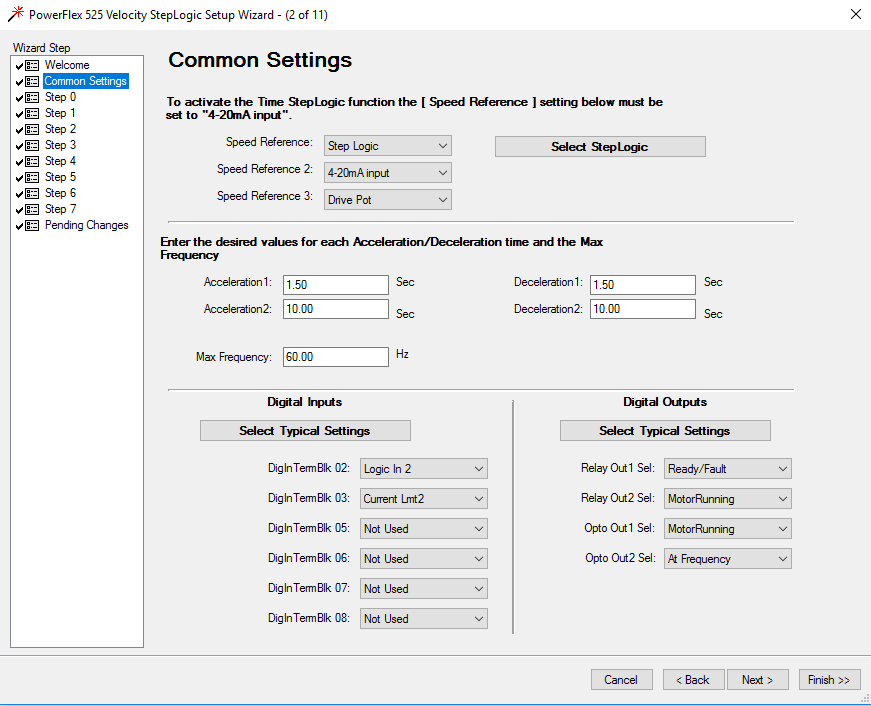 When you have set the common settings then you need to set up each step.

Velocity step logic has many variations.

Of course, this is just naming a few so to give you a better viewpoint we have added this image below. 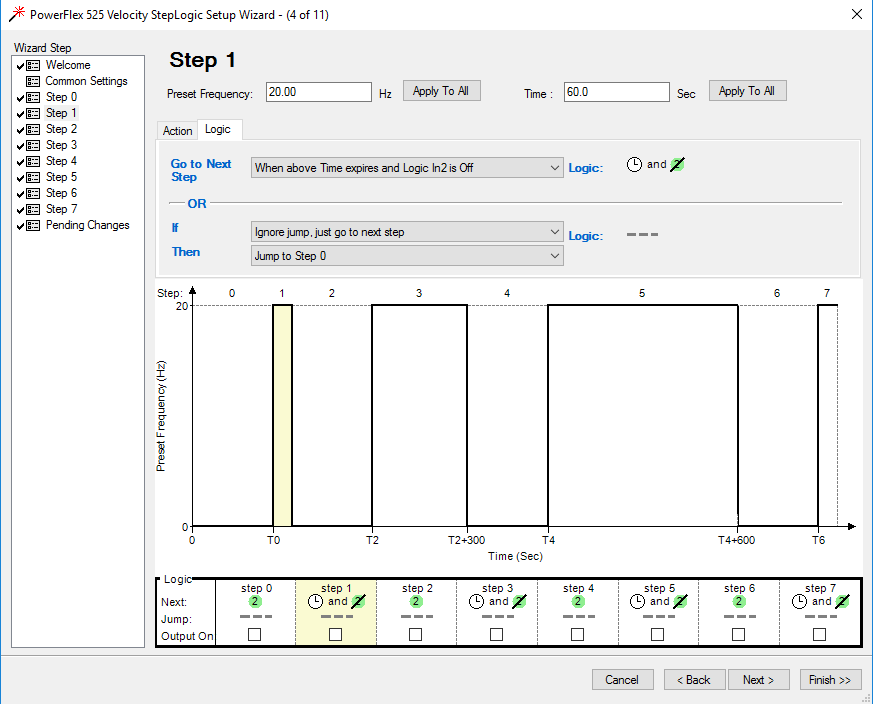 Using Velocity step logic is great for batching systems to give a use case or example of an application.

Batching systems often have set times that they need to mix & set speeds that need to be used to obtain the correct mix & density of the product being made. From my work history, I have seen batching used in food & beverage, pulp & paper, cosmetics, & the pharmaceuticals industry which all have wide ranges of business sizes, from large manufacturers to start-ups.

For simple applications that have no PLC controls yet have pushbuttons or selector switches this is a great opportunity to save money or even have a simple implementation of a Powerflex 525 or any Powerflex 5 series drive to get things done. With even setting things up quickly.

Setting up timing only in a Velocity Step Change

Simply open the velocity wizard the then step through each step setting the time & the velocity of the speed you would like the motor to run in that specific step, it’s that easy.

On each step there is several setting:

This is what needs to be set if you are just using the velocity without an input transition. This also has the logic section which doesn’t need to b changed if you are running a velocity step with a time expire transition.

If by chance, you would like for the step to stay in the current step that it is in until an input is made then you will need to use the Logic section then set it to whatever is needed to be met.

As you can see, each step has a large variety of logic elements to control the step & the way the Powerflex 525 will react. 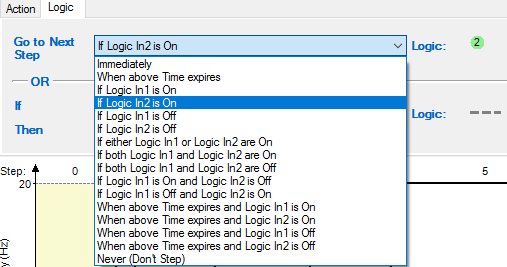 I recently used a Powerflex 525 VFD in a trainer simulation for a batching system to show how this can be easily done. In doing so, I mixed the uses of time & digital inputs with a Studio 5000 program to show how you can also integrate certain Powerflex 525 parameters to aid in accomplishing a complete batching system so that an operator can make real-time changes for changing batches. Of course, you do not need to use a PLC of any kind.

This is just a real-world example to show as many uses of step logic as to give the best understanding.

To better explain what I did, I wired two hardwire inputs into the Powerflex 525 into digital input one & digital input two. Only using digital input two in the step logic controls but wired both of them to have better options. I then tied four new parameters into the PLC tag structure to be able to change the step times through an HMI or through a recipe system.

This gives a lot of flexibility to a batching system to have variations of what a batching can run & have different options.

I made a video to show how this system works to help give a clear understanding of how a Powerflex 525 can use step logic for a batching system within a short time.